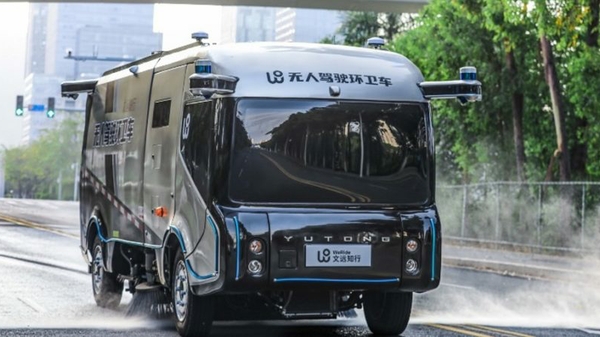 When it comes to safety, efficiency and sustainability, autonomous vehicles are delivering a clean sweep.

The fleet of 50 vehicles is sweeping, sprinkling and spraying disinfectant in Guangzhou, China, all without a human driver at the wheel. The robo-sweepers run on a cloud-based fleet management platform that automatically schedules and dispatches vehicles using real-time information on daily traffic and routes.

Street sweeping is a critical municipal service. In addition to keeping dirt and debris off the road, it helps ensure trash and hazardous materials don’t flow into storm drains and pollute local waterways.

While street sweepers typically operate at lower speeds and in more constrained environments than robotaxis, trucks or other autonomous vehicles, they still require robust AI compute to safely operate.

Street cleaning vehicles must be able to drive in dense urban traffic, as well as in low-visibility conditions, such as nighttime and early morning. In addition, they have to detect and classify objects in the road as they clean.

To do so without a human at the wheel, these vehicles must process massive amounts of data from onboard sensors in real time. Redundant and diverse deep neural networks (DNNs) must work together to accurately perceive relevant information from this sensor data.

As a high-performance, software-defined AI compute platform, NVIDIA’s solution is designed to handle the large number of applications and DNNs that run simultaneously in autonomous vehicles, while achieving systemic safety standards.

The WeRide Robo Street Sweepers are the latest in the company’s stable of autonomous vehicles and its second purpose-built and mass-produced self-driving vehicle model.

WeRide has been developing autonomous technology on NVIDIA since 2017, building robotaxis, mini robobuses and robovans with the goal of accelerating intelligent urban transportation.

Its robotaxis have already provided more than 350,000 rides for 180,000 passengers since 2019, while its mini robobuses began pilot operations to the public in January.

And with the addition of these latest vehicles, WeRide’s fleets are set to make a clean sweep.

Bitcoin Volatility Fades Away; Analyst Who Predicted Bitcoin Drop to 35000 Points Out Top...